Over time, your property’s exterior siding, patio area, driveway, walkway, and other concrete surfaces can become dingy due to accumulated dirt, dust, mold, and mildew. Scheduling regular pressure washing is the most cost-effective way to eliminate these contaminants and maintain your property’s appearance and value. When it comes to professional pressure washing in Brentwood, TN, 15cent Pressure Washing is the go-to company.

If you need hassle-free exterior cleaning experience, you can’t go wrong with our highly trained and certified pressure washing technicians. We have the skills and equipment to handle any exterior surface for residential and commercial properties.

With our state-of-the-art equipment, we deliver outstanding, long-lasting results with a 100% satisfaction guarantee. 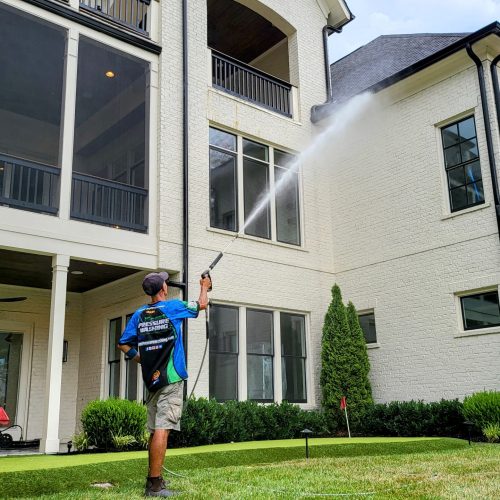 If you need professional and reliable residential pressure washing in Brentwood, TN, Franklin, TN, or Nashville, TN, 15cent Pressure Washing can help. Our residential services include:

At 15cent Pressure Washing, we also offer a wide range of commercial power washing services, including:

You can also trust our pressure washing technicians to do an excellent job with:

From graffiti to mold and moss growth, there is no problem we can’t solve with a good power wash. Many look to us for premier pressure washing in Thompson’s Station, TN, because we offer:

At 15cent Pressure Washing, we have been in the business for more than 15 years. Besides the extensive industry experience, we also have a team of highly-trained, certified, and licensed cleaning technicians to do the job right the first time. Our technicians undergo regular training to ensure that they stay current with pressure washing skills and technologies.

We boast an A + rating with the Better Business Bureau, thanks to our excellent customer service. Our customers are our priority, and we go over and above to create lasting relations with them. We treat our customers like family, with honesty, integrity, and consciousness to their specific needs.

At 15cent Pressure Washing, we uphold high-quality workmanship to exceed our customers’ expectations and achieve 100% satisfaction. Besides training our staff, we also upgrade our equipment regularly to ensure safe and effective pressure washing in Brentwood, TN, and the surrounding areas. If you notice any issues with our work, please let us know, and we will fix it promptly.

Brentwood is a city in Williamson County, Tennessee, with a population of 45,373, according to the 2020 U.S. Census. Incorporated in 1969, Brentwood is one of America’s wealthiest cities.

The parks include Marcelle Vivrette Smith Park, Brentwood’s largest park, and Crockett Park, home to the historic Cool Springs House and Eddy Arnold Amphitheater. Brentwood is one of the best places to live in Tennessee, offering its residents a rural feel.

Get a Free Estimate in Brentwood, TN Today

Residential and commercial property owners choose pressure washing services from 15cent Pressure Washing because of our high-quality work, excellent customer service, and 100% satisfaction guarantee. Contact us at (931) 446-1031 or email us at contactus@15centpressurewashing.com today to get a free estimate for pressure washing in Brentwood, TN, or the surrounding areas.